Marking as the pioneering bank to set foot in the metaverse, JP Morgan had officially opened its own “lounge” in Decentraland, currently one of the most popular blockchain-based virtual reality gaming platforms. This makes JPMorgan the first banking firm to get involved in the metaverse, as it eyes on huge market opportunities. 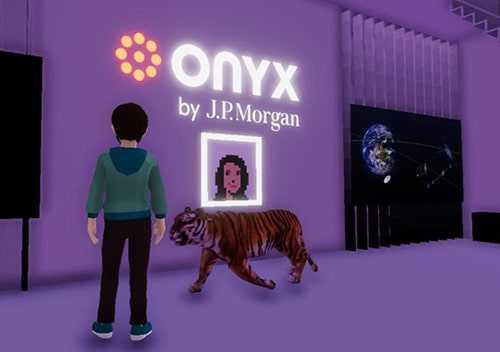 JPMorgans’ own space in Decentraland is named Onyx, which features a virtual shopping district called Metaiuku, copied from Harajuku District in Japan. Upon entering Onyx, users are greeted by a tiger that wanders around, with a picture of Jamie Dimon, the Chief Executive Officer of JPMorgan. The lounge also currently features videos about the banks’ achievements in the blockchain space and talks about fintech and crypto market.

Money and Opportunities – What JPMorgan Sees

Upon launching Onyx, JPMorgan had expressed how they see “limitless” opportunities and huge market potential that the metaverse presents. The bank’s perception of this 3D augmented reality focuses on how the economy of metaverse offers potential opportunities in various areas and how the dynamics of the offered supply and demanded products drives the people into the market.

Based on the bank’s previous press release, they currently see around US$1 trillion of annual gains in the metaverse. There’s currently no doubt on this given how the virtual and digital market has skyrocketed over the last year.

The Sandbox and its rival, Decentraland, two of the biggest virtual reality platforms, reported almost $500 million of sales for around 90 thousand virtual item transactions in 2021. Second Life, an online metaverse gaming platform, reported roughly $700 million in GDP for the past year.

Currently, NFTs offer a $41 billion market cap. In recent months, six of the biggest virtual platform brought over $160 million of sales on Opensea, one of the biggest NFT trading platforms.

Although prices for metaverse properties have skyrocketed over the past year, price is only one factor contributing to the spotlight on metaverse. There’s also the various potential to commercialize virtual properties in gaming, content creation, and other ventures.

With its recent entrance into the space of metaverse, JPMorgan aims to be one of the pioneers in the market by industrializing its own brand in the economy.

As mentioned in the metaverse statement released by JPMorgan, the firm is ready to traverse the various rooms that the metaverse pose. The bank ensures that the success they will aim to build will be highly contingent on establishing a well-built financial system that allows flexibility to the people in interacting via the 3D digital reality.

The bank mentioned that it’s eyeing to enable a gaming environment that will mirror the global financial economy. They intend to institutionalize a digital landscape with its own in-game items, payment methods, and digital assets, which users can commercialize and monetize. Given its global high-standard banking ecosystem, JPMorgan believes that this is a huge opportunity for them to initiate the same in the metaverse.

Virtual property ownership is also one key opportunity area that JPMorgan seeks to enter. This is in line with the recent rise of virtual real estate prices in the market. Just in six months last 2021, prices for virtual lands skyrocketed, amounting to $12,000 in the month of June.

JPMorgan believes that virtual property ownership would be a profitable area on their end since they have already developed a competitive stance on real-world real estate lending. The bank envisions a virtual real-estate market that will mirror the banking ecosystem and services provided in the real world, such as lending, rents, mortgages, and credits.

However, some financial analysts believe that the Metaverse will require a different type of banking ecosystem and that the current financial foundations might not be as functional in the metaverse economy.

Inventors Seeing Metaverse as a “Worth It” Venture

Even though JPMorgan had been the pioneering bank to mark its existence in the virtual space, there were multiple investor giants who have already foresees the virtual space as a potential trillion-dollar venture.

Last 2021, Cathie Wood of Ark Invest mentioned that the metaverse will eventually enter different sections of the economy, going beyond the current gaming and virtual property areas. She believes that with its limitless potential, metaverse could be a multi-trillion opportunity.

Grayscale, one of the largest crypto and digital currency investing companies, mentioned in a press release that it foresees more than $1 trillion dollars annual sales for the meta-economy given the potential of blockchains in the digital world.

Multiple bank analysts have also noted that the metaverse market could reach $4 trillion in China alone as it provides a more interactive platform to the public but could go higher than $8 trillion once investors have explored different opportunities like education and real-estate ownership.

Given the huge opportunity it poses, it is expected by most that more banks and investors will probably join the metaverse within the next years.

Are you interested to learn more about metaverse? We have experts that can help you!

Back Forward
As a valued customer, we’d love to stay in touch with you with things like offers and ideas. Please be assured, we’ll always treat your information carefully as described in our Privacy Policy.
Cookies
We serve cookies. If you think that's ok, just click "Accept all". You can also choose what kind of cookies you want by clicking "Settings".
Settings Accept all
Cookies
Choose what kind of cookies to accept. Your choice will be saved for one year.
Save Accept all