All financial transactions are regulated by a multitude of laws, legal acts, and rules that all legitimate companies must comply with. All financial systems use certain principles to verify their users and customers, allowing them to fight money laundering and illegal money circulation more effectively.

Understanding the modern principles of how financial institutions work is useful not only for business representatives and bank employees but also for ordinary users. Therefore, in this article, we will analyze in detail what is behind the abbreviations AML and KYC, which are actively used in business.

AML is a system of laws and principles aimed at preventing and detecting money laundering and terrorism financing. The abbreviation stands for “Anti-Money Laundering”. For most financial institutions, AML is a set of processes and approaches based on the analysis of aggregated data about users and their financial activities.

Simply put, AML is a set of steps financial institutions must take to prevent criminals from using their services to launder illicit money or finance terrorism.

AML is also sometimes referred to as “anti-laundering laws” because they are designed to prevent criminals from “laundering” incomes received by illegal means and financing criminal activities.

Various tools, internal procedures, and control measures are used for this purpose, such as monitoring financial transactions and detecting suspicious activity.

In particular, automated analytical systems analyze the activities of a particular user and determine whether the available information about the client corresponds to the transactions that he or she performs.

In the case that the system fixes a transaction that does not correspond to the particular user’s standard behavior, it signals the need for verification.

The concept of AML first began to be widely used in 1989, after the intergovernmental organization FATF (Financial Action Task Force) was founded in Paris to develop anti-money laundering measures.

This organization develops international standards related to the prevention of money laundering, helps their implementation in different countries, and counteracts the financing of terrorism.

AML AT THE NATIONAL AND INTERNATIONAL LEVELS

AML principles are being implemented by many states at the national level and in most cases, the recommendations and standards of the FATF are taken as the basis. An important part of the process is the rejection of anonymous financial transactions and instead, fighting for their transparency. That is, financial institutions can and even must monitor the activities of their customers, identify suspicious transactions and report them to the appropriate authorities.

For conducting financial activities in the European Union, it is important to know that since 2015 the EU has adopted a modernized regulatory framework that includes several anti-money laundering (AMLD) directives. The most recent 6th directive, which entered into force in June 2021, includes provisions that increase liability for financial crimes, expand the list of such crimes, imply closer cooperation between European states in fighting money laundering, etc.

The abbreviation KYC stands for “Know Your Customer”. This principle obliges financial institutions to identify users before making a transaction. 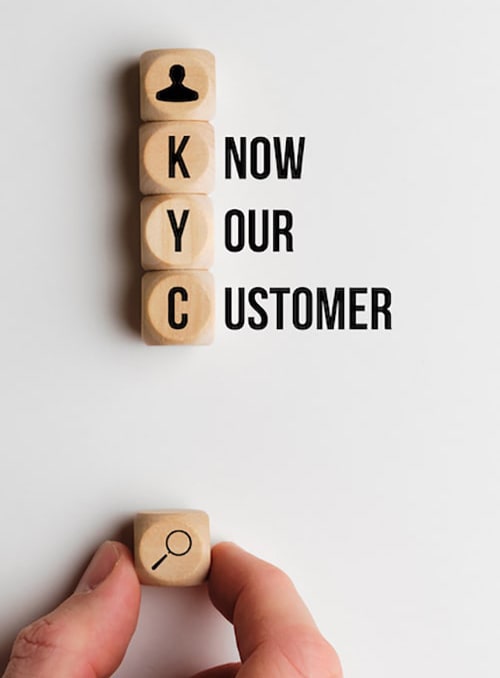 According to the KYC rules, anonymous financial transactions are illegal.

The concept of KYC was implemented in 2016. It was introduced by the Financial Crimes Enforcement Agency (FinCEN) of the US Department of the Treasury. It was this agency that first suggested the use of formal KYC requirements.

However, even today there are no particular standards regarding what kind of user data should be requested. Each service and each company decides this individually, so the identification and verification procedures (checking the validity of the entered data) often differ significantly.

In most cases, clients are asked to provide:

As a rule, the specified data will have to be confirmed by providing a photo or a scanned copy of the relevant documents, as well as verifying the phone number via SMS. Additionally, online interviews may be conducted. The purpose of all these activities is to collect and verify customer data.

Today, KYC protocols are being implemented not only by traditional financial institutions, such as banks and insurance companies but also by crypto companies.

For example, the Binance cryptocurrency exchange and blockchain ecosystem require users to provide their full name, date of birth, and phone number for registration, and account verification requires identity confirmation in the form of a scanned copy of an identification document with a photo (passport, driver’s license, etc.) and a selfie with them.

Differences between KYC and AML

Despite the obvious difference, the concepts of KYC and AML are regularly confused. In a broad sense, KYC is only a part of the measures taken to combat money laundering. Other elements of the AML principles are CDD – Customer Due Diligence, EDD – Enhanced Due Diligence, risk assessment and continuous monitoring of transactions, internal audit and control, and more.

To follow the principles of AML, companies have to use a complex approach, which necessarily means the implementation of the KYC algorithm.

Particular dissatisfaction with the introduction of the principles of KYC and AML is expressed by users of blockchain technologies. In their opinion, the need for identification and verification discredits the very basis of their work, as they were initially presented as anonymous. On the other hand, the possibility to make financial transactions anonymously could not fail to attract scammers, which endangered honest users.

Therefore, cryptocurrency exchange services and other players in the crypto industry are forced to agree with the requirements of regulatory authorities and implement the KYC principle for user identification, as well as AML protocols for monitoring suspicious transactions.

Very often users are also dissatisfied with the need to go through multi-stage identity verification due to the length and complexity of all procedures. So, you can regularly meet complaints from dissatisfied customers about an inability to register on a particular service, verify an account, or pass the security control. Financial institutions are trying to deal with these difficulties and disadvantages.

Also, many clients of financial institutions express concerns about the safety of their personal data. Of course, banks, crypto-exchanges, and other services promise to ensure their security, but leaks occur and as a result, private information falls into the hands of fraudsters.

Despite some shortcomings and imperfections of the measures taken, as well as despite the dissatisfaction of users, the fact remains that the measures to combat money laundering and prevent financial crimes do work. Therefore, in the nearest future, they will likely not only be maintained but even tightened.